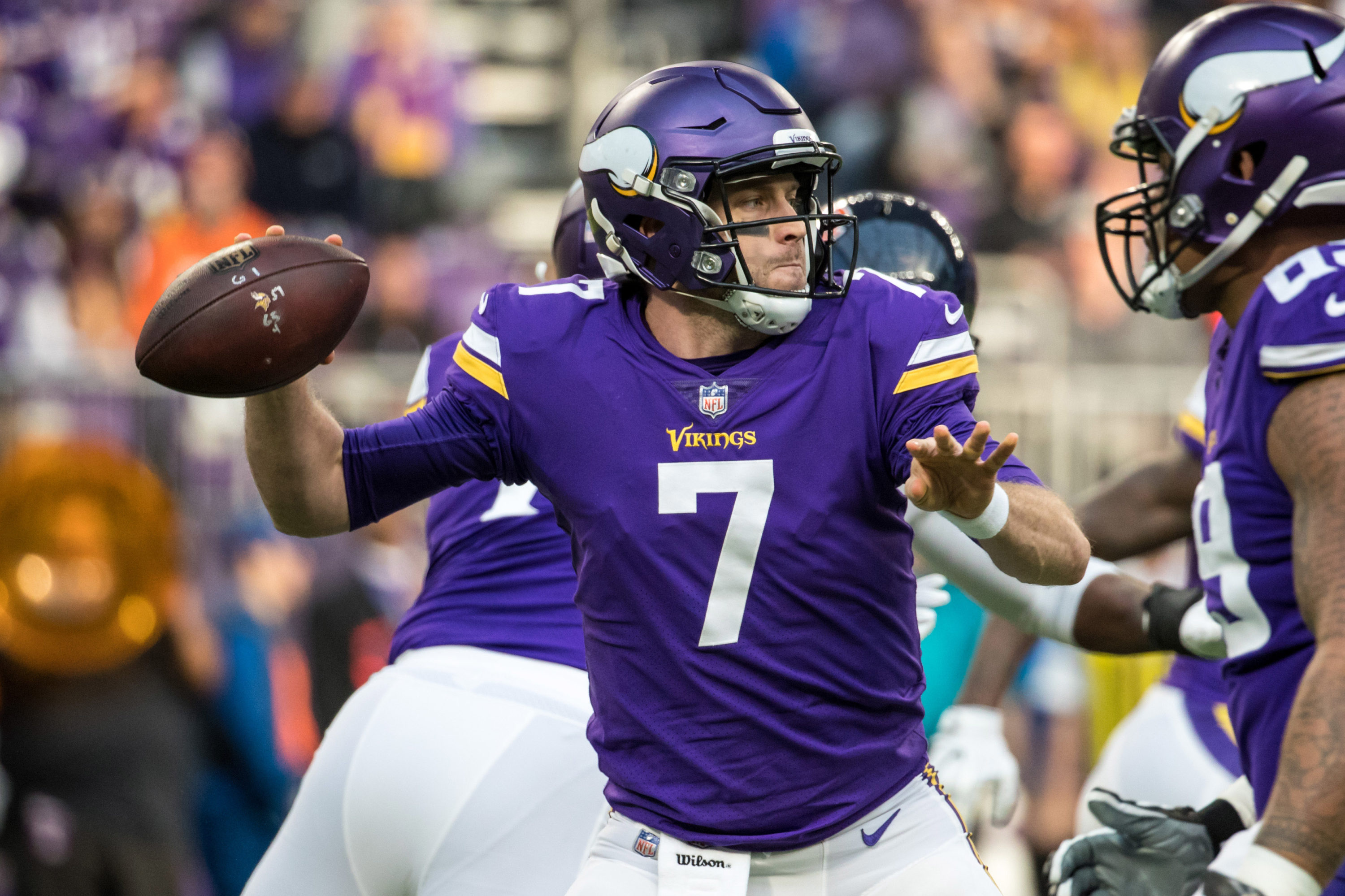 Broncos Film Room: Case Keenum is not who you think he is

As a one-year wonder playing for a great team, the former undrafted journeymen is seen as a risky overpay by fans, which might be fair, but we’re not in the business of making assumptions or labeling players here at BSN. Because of that, we had to go back to the tape to see what made Keenum go from a career backup to coveted free-agent signing.

Before digging in, it’s worth remembering that while Keenum is now 30-years old, he came from a spread attack, which requires a much greater adjustment to the pro game, so it should come as no surprise that he’s found his groove later in his career.

This year’s conference championships are a great example of why patience is paramount with spread QBs. Aside from Tom Brady, the other three quarterbacks—Nick Foles, Blake Bortles, and Keenum—were all former spread signal-callers who’d been written off as busts, only to find success later in their careers.

So, while it could just be a fluke, there are enough encouraging signs to think the arrow is pointing up for Denver’s big signing as he enters his seventh NFL season.

As mentioned in our film room on all the free agent quarterbacks a few weeks ago, the first thing that stands out is Keenum’s eye manipulation. This allowed him to make plenty of throws deep, an area where he’s at his best, thanks to his fine accuracy on vertical throws, combined with excellent touch.

He regularly netted chunk plays with the Minnesota Vikings on deep rainbows to his two talented outside receivers, while looking off the safety before letting it rip.

Another area in which Keenum excelled was throwing on the run. Whether it be on designed bootlegs or on scrambles with pressure bearing down, the QB was able to get outside and make good throws.

In fact, the former Houston Cougar was supreme against pressure, avoiding the rush with his feet and always keeping his eyes downfield, looking to throw, not run. Keenum’s passer rating of 110.1 outside the pocket was the best in the NFL, allowing him to overcome less-than-stellar play from his offensive tackles in Minnesota. That’ll help him a lot in Denver next year, as he’s never had the benefit of a good line in his pro career.

Keenum’s shown himself to be clutch on third down, too, where he was the fifth most accurate QB in the NFL, converting 45 percent of his throws for first downs. While watching the tape, it was almost surprising how often he came through on third down, a big reason for the Vikings’ offensive success this season.

The seven-year veteran is a decisive thrower who can process information rapidly and go off of his secondary reads with ease. That, added to his ability to strive against pressure and on the run, made him succeed in such situations. He managed only to be sacked 22 times last season, which was better than any full-time starter, with the exception of Philip Rivers, Derek Carr, Drew Brees, and Ben Roethlisberger.

He was also fantastic in the red zone, where his 17-to-1 touchdown to interception ratio was really impressive. His quick decision making, anticipation throws, and cool demeanor under pressure allowed him to be greatly successful in this area as well.

Keenum isn’t a phenom threading the needle in traffic, but he does show great touch on passes in the red area. He has a high IQ, throws with good anticipation and has shown nice ball placement while leading his targets. He might not be a special athlete, but he made some really nice plays outside of the Xs and Os, especially passing on the run.

While there’s a lot to like about the former Viking, he’s far from perfect and was able to overcome some obvious physical limitations this past year.

For starters, his arm strength is average at best per NFL standards, as he doesn’t show the zip or power to squeeze throws in traffic. He’s also a small-framed QB at 6-foot-1 and 215 pounds and is an average athlete who won’t be able to escape pressure the way elite players at the position like Russell Wilson or Aaron Rodgers can.

The biggest area in which these limitations show up is when Keenum is caught off balance under pressure, where he’ll force throws and get himself in trouble.

His footwork can be inconsistent, and he needs to be more conservative picking his spots and knowing when to throw the ball away. Simply put, he needs to know his limitations. Case did a nice job picking his spots this past year, but it’s a delicate balance he’ll have to strike. If he feels the pressure to earn his pay raise, having to carry a greater load of the offense could lead to some poor forced throws. It’s imperative that he doesn’t regress to being a gunslinger during his first year in Orange & Blue.

His limited zip shows itself in the red zone, too, where he had tons of success and was turnover-free but he also “only” completed 51 percent of his passes—15th best in the NFL—succeeding more thanks to his ability to process information quickly and throw with touch rather than power.

That lack of arm strength also shows itself when he needs to gun it to the sideline on out-routes, where he was caught making a few under throws which hurt him—see this interception against the Washington Redskins.

While his deep ball accuracy and touch are some of his best traits, he’s much better outside and underthrew his fair share of passes over the middle of the field.

If he can stay consistent and pick up the new offense quickly—he’s already had to play in four different offenses in his six-year NFL career— Keenum’s proven he can win in this league with the right offense and supporting cast around him.

Bill Musgrave’s offense (which we broke down here), could work nicely as he can simplify the playbook, limiting tight window throws and giving the Broncos new QB a balanced attack. Musgrave has also shown a desire to use spread out shotgun looks, which is exactly where the 30-year old vet is at his best. A heavy dose of play-action passes would also suit Keenum nicely, another staple of the Musgrave offense.

That said, he’s not a franchise quarterback with elite talent, and doesn’t exactly warrant ignoring the quarterback position in the draft if the Broncos have the option to select someone they believe could be the future of the franchise. Keenum’s a system QB, and that’s just fine.

While similar to Baker Mayfield in style and stature, Mayfield has superior arm strength and athletic tools—the same could be said about the other top three prospects in this draft class.

However, at a relative bargain price that doesn’t compromise the Broncos long-term cap flexibility, he’s a solid signing who’s proven a lot more at the NFL level than say, Mike Glennon or Brock Osweiler, who received larger contracts the past two free agencies.

Keenum is a point-guard quarterback, distributing passes on time and spreading the ball around by being decisive in his decision making.

He’s an instant upgrade at the position in Denver, and if he can stay consistent in his decision making, he should restore the offense to decency, with a chance for much more, if the Broncos can upgrade the pieces around him.

DNVR Broncos Podcast: Who does the shortened preseason impact the most?