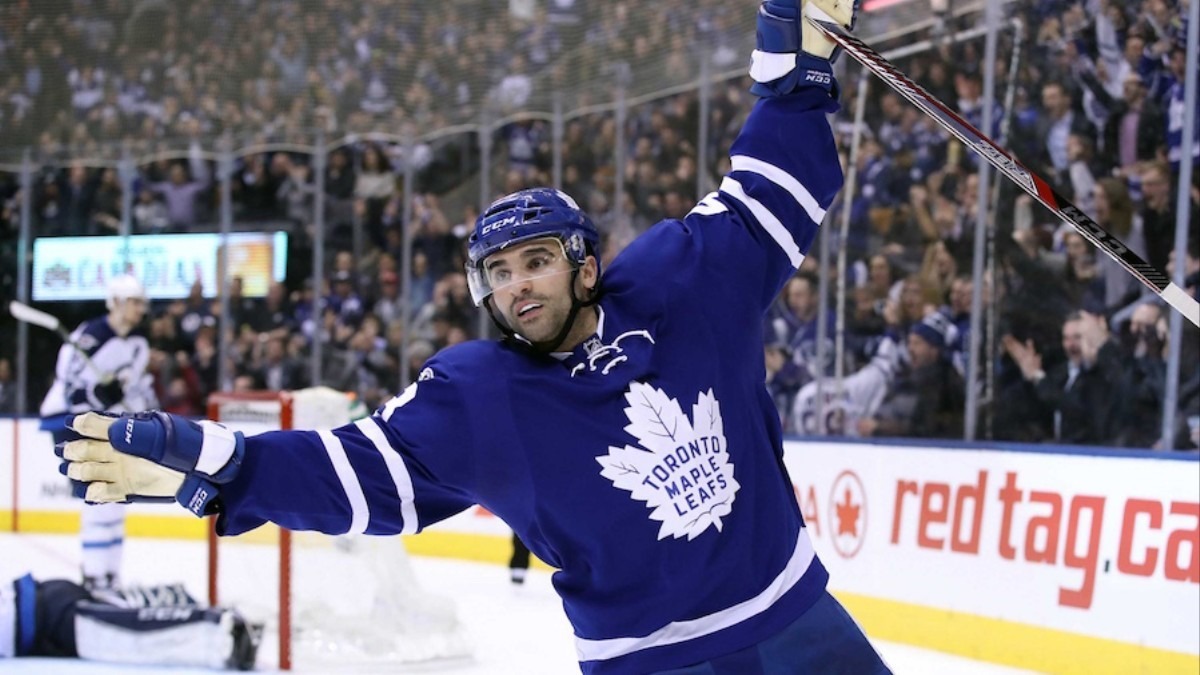 How Nazem Kadri could push Colorado over the edge

Joe Sakic finally got his guy.

After sending Carl Soderberg to the Arizona Coyotes, there was a glaring hole in the Colorado Avalanche lineup at center behind Nathan MacKinnon. Sakic filled that hole by trading Tyson Barrie and Alex Kerfoot to the Toronto Maple Leafs in exchange for Calle Rosén and veteran center Nazem Kadri.

The reasons for Colorado’s interest in Kadri is clear.

“Well we were obviously looking for a second-line center,” Sakic explained after the trade. “He’s got two 30-goal seasons under his belt, he plays with grit, and he’s signed for three more years.”

But how much does Kadri really help the Avs improve at 2C?

Carl Soderberg is a two-way center who Jared Bednar counted on for his reliable play and defensive responsibility. While Kadri has transitioned toward a 200-foot game, he still hasn’t quite matched the defensive prowess of Soderberg. Using him as a shutdown center on the second line is slightly more risky, as he tends to allow high-danger chances in the slot of his own team’s zone.

However, considering Soderberg logged 49 points last season while bouncing between Colorado’s second and third lines, it’s likely that Kadri will put up better numbers as the undisputed second-line center. Additionally, Kadri’s advanced metrics over the past three years show that he can generate greater offense and maintain a higher rate of possession than Soderberg during five on five play. If his potential translates into productive point-getting, his offensive upside will overshadow the defensive regression. 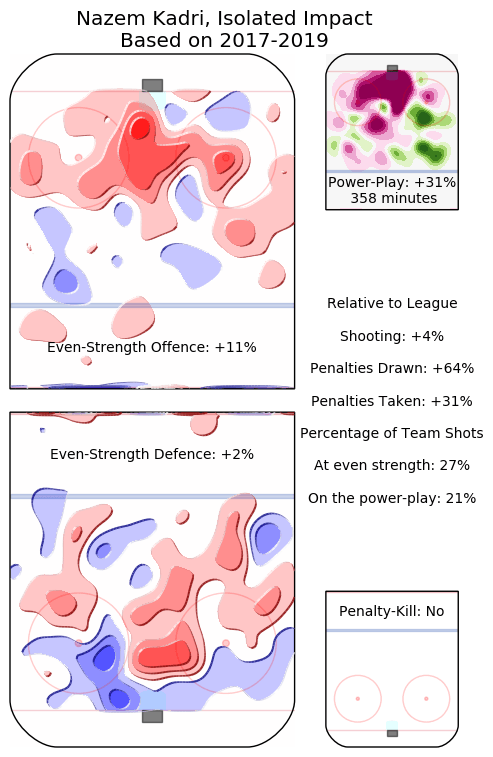 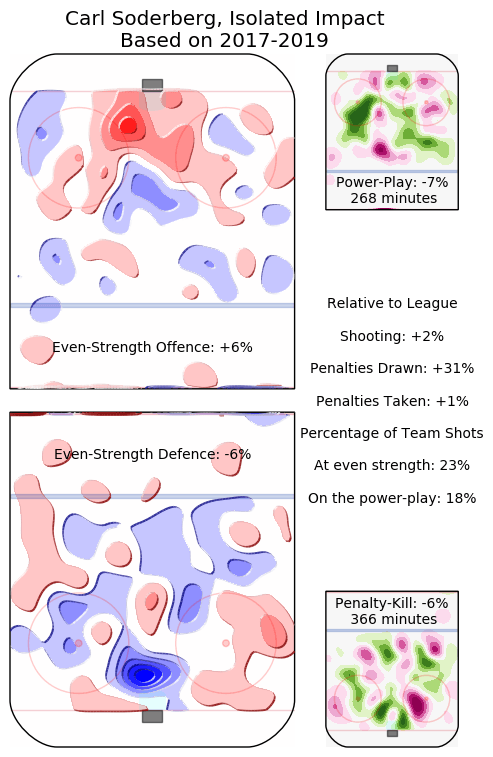 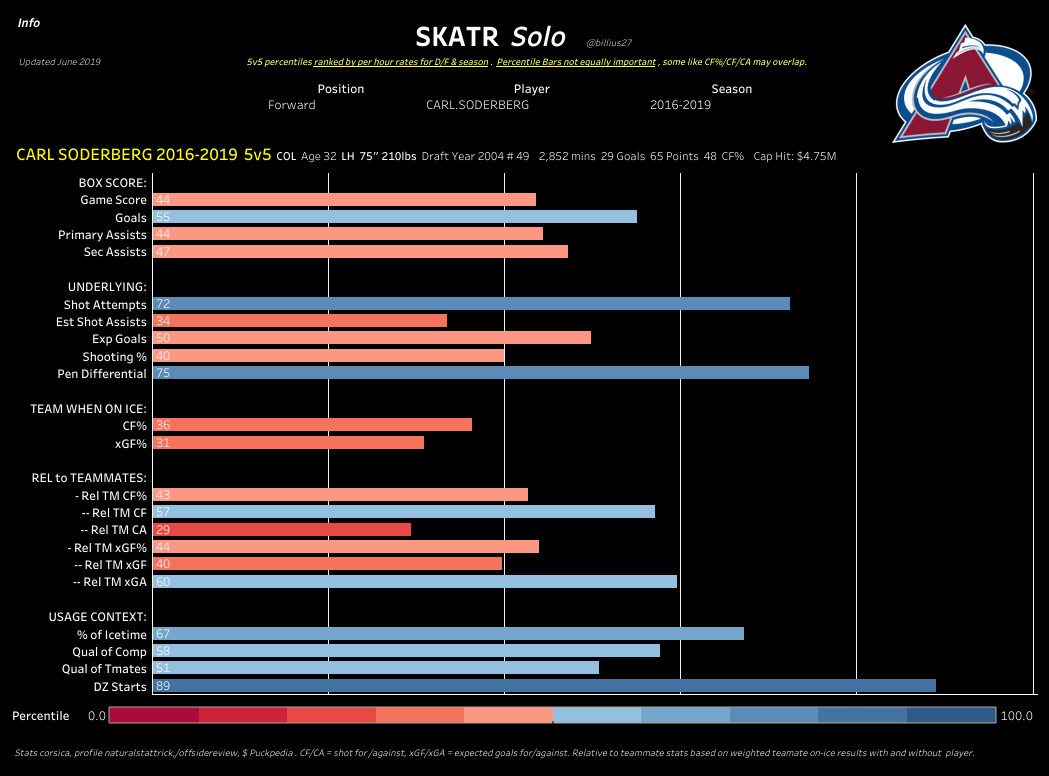 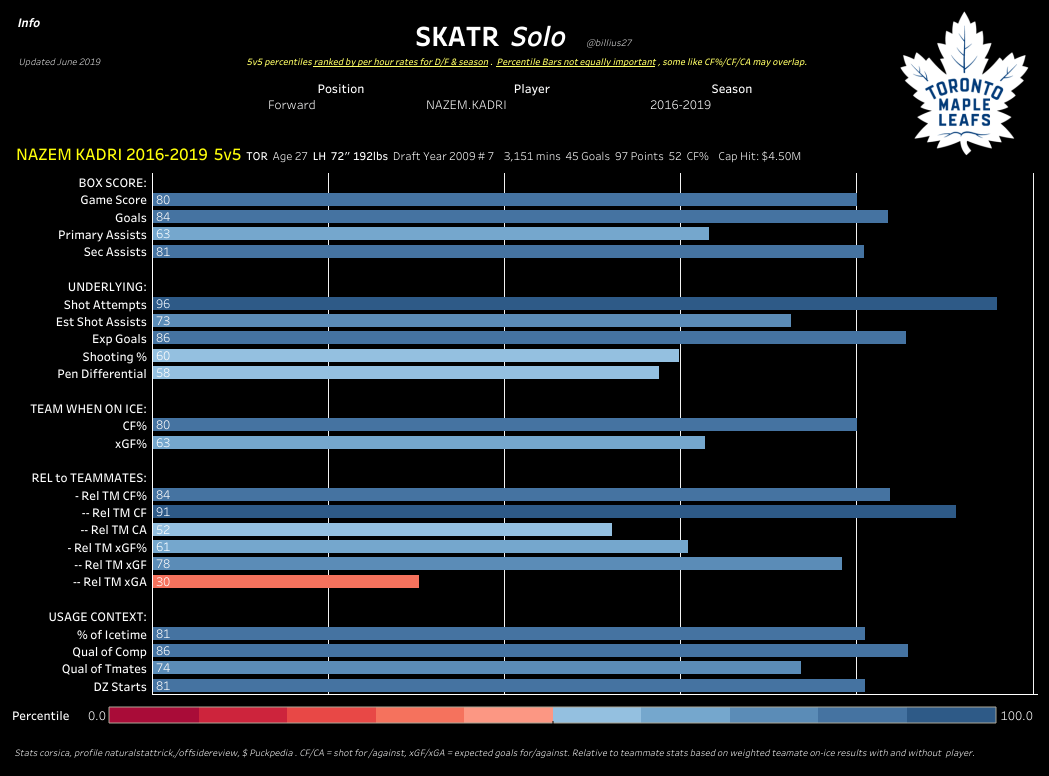 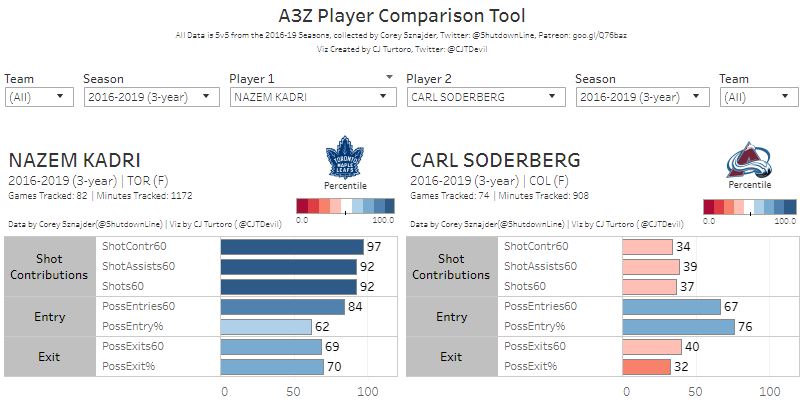 Sakic and crew are hopeful Kadri will provide stable scoring on the second line while jumpstarting the production of young forwards like Tyson Jost and Andre Burakovsky. His offensive skills and playmaking ability are encouraging enough to believe that Kadri can pull it off. Last season, his linemates showed improved statistics in almost every area while Kadri was on the ice, especially 39-year-old Patrick Marleau (Table 1).

While Jost and Burakovsky have shown a lot of encouraging play, neither of them has turned their offensive talent into consistent production. Luckily, Kadri is one of the best in the league at driving shots to the net, be it from his own stick or from those of his linemates (Figure 1). Kadri’s experience and offensive creativity at center should allow the youngsters to find their footing next season.

Figure 1: Primary Shot Contributions. Chart created by Sean Tierney, who can be found at https://public.tableau.com/profile/sean.tierney#!/.

But Kadri’s production dipped last season after he potted only 16 goals and 44 total points in 73 games, resulting in his least productive season in the last four years. After the addition of John Tavares last summer, Kadri’s role was reduced to third line center where he mostly played alongside Patrick Marleau and Kasperi Kapanen.

His usage only dropped slightly though, as he was deployed one minute and five seconds less per game at even strength last season compared to 2017-18. Overall, his 16:11 average TOI wasn’t far behind his previous year’s average of 16:46.

Despite Kadri’s reduced role, his underlying statistics actually improved last season. While leading Toronto’s third line, Kadri logged 0.086 expected goals for per 60 minutes, 0.035 expected goals against per 60 minutes, and 4.17 overall Corsi per 60 minutes. In 2017-18, his numbers were 0.031, 0.071, and 2.38, respectively (NaturalStatTrick). Thus, his low-production year may have been a result of his role change or simply being unlucky. The Avalanche Analytics Department is certainly banking on that.

Outside of his offensive production, the Avs are hoping Kadri takes pressure off Nathan MacKinnon’s top line. It’s no secret that Jared Bednar relied heavily on the Landeskog/MacKinnon/Rantanen line last season, and MacKinnon’s numbers suggest he might have been overworked.

MacKinnon had the fourth highest average ice time out of all NHL centers last season and was the only forward to lead his team in TOI. He seemed up to the task last year, but more rest will reduce injury risk and keep the top line fresh for a deep playoff run.

Kadri also provides a physical and emotional presence that could come to change the demeanor of the Avalanche locker room for better or worse. On the one hand, Colorado lacks regular agitators in its lineup outside of Nikita Zadorov and occasionally Gabe Landeskog. Kadri could provide the Avs with the fire they need to extend their playoff run.

On the other hand, Kadri is notorious for mismanaging his emotions and hanging his team out to dry in crucial situations. Through 19 career playoff games, Kadri averaged almost three penalty minutes per game. And if his past two playoff appearances are any indication, he hasn’t gotten a grip on his emotions just yet.

Two years in a row, Kadri was forced to watch from the press box as his team lost to the Boston Bruins in Game 7 following his suspensions for illegal hits to the head. His reckless decision-making cost his team a key center (and possibly the series) in both situations.

Regardless of the risks associated with Nazem Kadri, he provides the Avs with a long-term, low-cost option at center. His contract, effective through the 2021-22 season, is currently the fourth longest on the team behind those of Nathan MacKinnon, Erik Johnson, and Joonas Donskoi, who are each signed for four more years.

If Kadri were to repeat his production from last season, he would already account for 9.36% of total team points at only 5.5% of total team cap. Assuming his numbers increase in a more prominent role within Colorado’s forward group, his contract will only become more valuable. And if he can produce near his career high in points, he’ll be one of the best value centers in hockey.


Figure 2: Player Contract Effectiveness. Please note that this graphic does not include ELC’s.

Even if Kadri only produces in his career average 45 to 50 point range during his next couple seasons with the Avs, he’ll provide a solid bridge at center before the arrival of Alex Newhook likely at the beginning of the 2021 season.

Kadri filled Colorado’s biggest offseason need on the second line: depth scoring. Although his defensive game is a step back from Soderberg’s, his offensive upside outweighs the risk. After adding him and other free agents including Donskoi, Burakovsky, and Bellemare, the Avs now sport one of the deepest forward corps in the Central Division, maybe even in the NHL.

The pieces are all there for Kadri to succeed next season. Now let’s see if he can step up to the challenge. 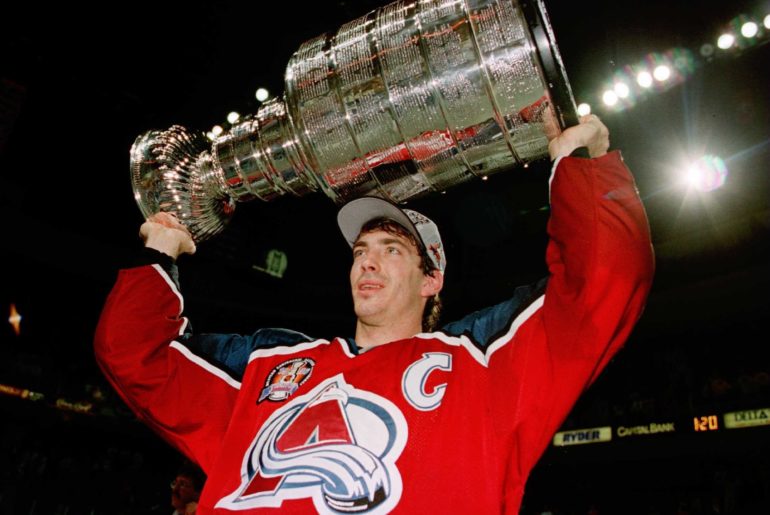 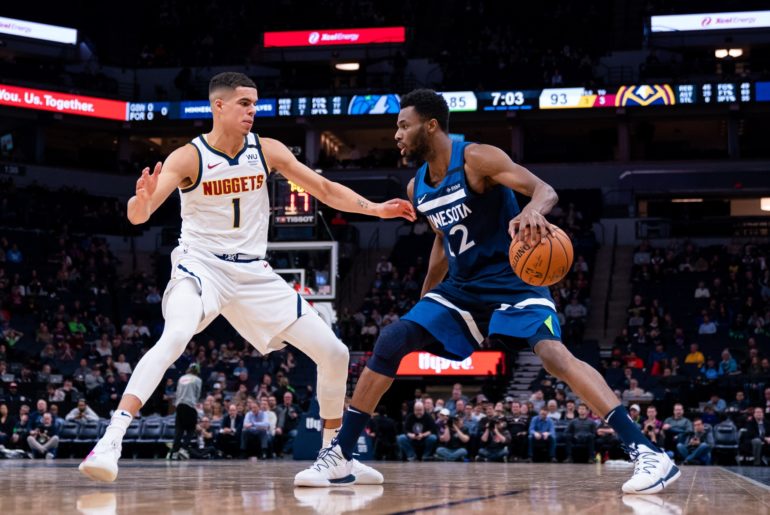 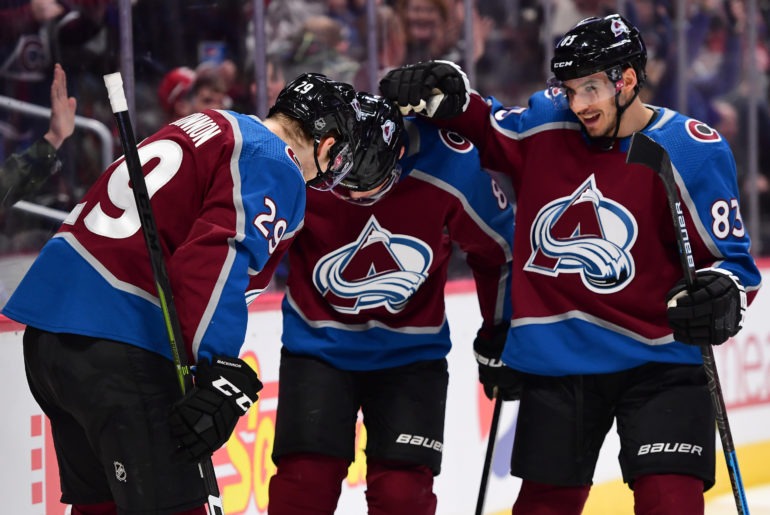