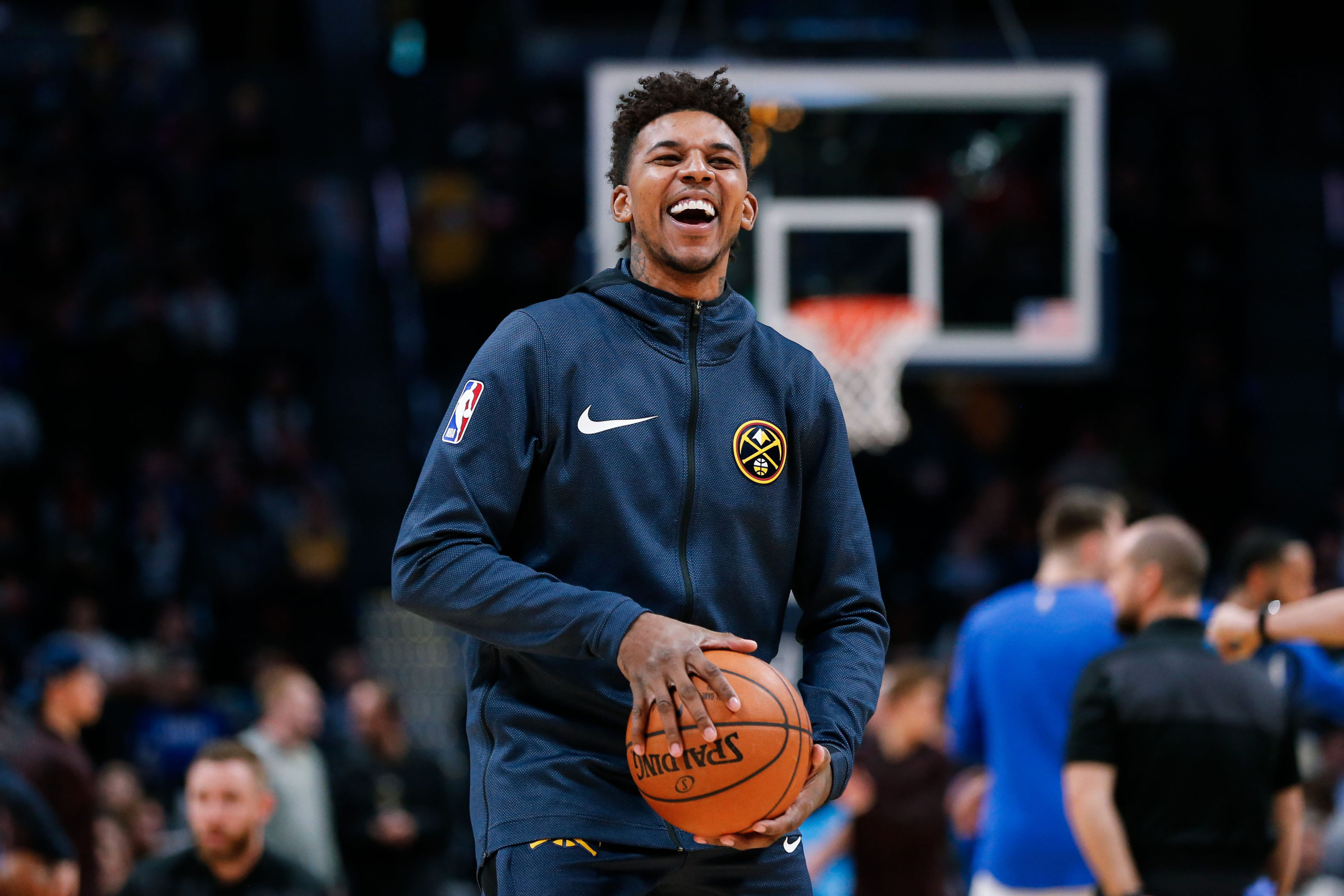 Less than seven days into his Nuggets tenure, Nick Young had already had run out of clothes. Young packed light for his stay in Denver, bringing only one duffle bag with him from Los Angeles where he had just watched the first two months of the NBA season on League Pass before the injury-riddled Nuggets signed him off his own couch to be their ninth man.

Young took to Twitter looking for recommendations for stores that either carried vintage or Supreme brand clothing to fill out his Denver wardrobe. His followers pointed him in the direction of a few shops in the area like FICE, a boutique gallery located in Denver’s trendy RiNo Art District. The trip was a success. Young copped a few items to spruce up his makeshift closet that’s still under construction and located for now in a downtown Denver hotel.

Whatever flavor Young is lacking in his wardrobe, he’s brought to the Nuggets locker room and Pepsi Center. It’s difficult to describe the walking phenomenon that is Swaggy P, or Swaggy Elvis, the latest monicker Young gave himself following his Nuggets debut. After Young strolls to the scorer’s table, tears off his warm-ups and enters a game, he walks onto the court to a round of applause more suited for The King of Rock and Roll than an 11-year veteran who’s averaged 11.4 points per game over his career.

Young doesn’t run up the floor, he glides. It never seems like he’s moving particularly fast, but Young has a knack for finding the soft spot in the defense if Denver is swinging the ball around the perimeter into an open three. His favorite position on the Nuggets’ fast break? Trailer.

It took Young less than three minutes to become one of the fanbase’s favorite players. His first game in a Nuggets’ uniform, which Young later said he had visions of before stepping on the floor, came in a high stakes nationally televised showdown with the Oklahoma City Thunder. A few possessions after entering the game in the second quarter, Young let it fly from 26 feet. He missed. But moments later off a Thunder turnover, Monte Morris found the newest member of the Nuggets’ second unit on the left wing. Splash. Pepsi Center erupted and nearly eclipsed the decibel level it reached last season when Gary Harris hit a buzzer-beating three in another nationally televised matchup against Russell Westbrook’s crew.

“It felt good to see the ball go in the hole, to go from watching cartoons with the family to hitting 3s in the game,” Young said.

“I had a dream about this.”

Young’s fit on the court and in the Nuggets’ locker room? “Seamless,” according to Michael Malone, who had never coached Young before he arrived in Denver but got good first-hand recommendations from Nuggets president of basketball operations Tim Connelly and assistant coach Wes Unseld Jr. Both were working with the Wizards when Washington selected Young 16th overall in 2007 out of the University of Southern California and rave about his free spirit and infectious personality.

“He just wants to fit in,” Malone said. “He’s not trying to stand out.”

“You don’t want to be the guy to mess up the groove,” Young said.

The Nuggets are flying high atop the West and are one of just one of three teams (Milwaukee and Toronto) with a top-10 offense and defense — a status Denver is maintaining in a loaded conference despite playing without three starters. None of the injuries to Paul Millsap, Gary Harris or Will Barton are season-ending, and the Nuggets will get their three starters back in due time. However, Denver knew it had to make a move with its options off the bench behind Morris, Malik Beasley and Trey Lyles limited to second-year forward Tyler Lydon, who hasn’t logged any significant minutes in his career, and rookies Thomas Welsh and Brandon Goodwin.

Denver needed someone with a few NBA reps under his belt to fill in for five or 10 minutes on a nightly basis. Enter Swaggy P.

Young has been a welcomed addition in Denver, who’s done just what the Nuggets have needed him to do, hitting 3 of 5 three-pointers through three games. Young said after his first game that he’s not too well versed in Denver’s playbook, but joked that knows to run to the corners on offense.

“When you throw him in the game he goes out there and does his job,” said Malone.

The court is Young’s sanctuary and place of peace, but off the floor, there’s only a certain level of comfortability that Young can find. He left his two kids back in Los Angeles and was able to get a much-needed visit from them last weekend. He’s trying to immerse himself in Denver by seeking out activities that are familiar to his routine back home, like scootering around the city’s downtown area, an activity he typically did every Sunday in L.A., stopping to take pictures with fans along his route.

He’s on the lookout for a trusted donut shop, hot dog stand and a place where he can grab a good veggie burger. Young likes to eat vegan at least twice per week, which isn’t the easiest schedule to stick to no matter how deep the room service menu at the Four Season’s runs. The biggest difference between Los Angeles and Oakland, where Young spent last season, and Denver? Maybe the nightlife.

“A couple restaurants close a little earlier here,” he joked.

The Nuggets are a tight-knit group who returned 78 percent of their roster from last year and are using that chemistry to infiltrate a conference that’s enjoyed law and order over the last few seasons. Young is a bit of an outsider who’s basketball hunger isn’t fueled by a loss in game 82 in Minnesota that kept Denver out of the playoffs for a fifth consecutive season. But he’s a familiar face around the league who’s still captain of the NBA’s meme team and the same guy who cut his postgame interview after the Warriors beat the Rockets in the Western Conference Finals last season short to “turn up.”

Young will always be that guy to fans, but he was humbled by a lack of interest around the league for his services this season. Still, his fun-loving personality can inject life and positive energy into any locker room.

Most Nuggets players say that it already feels like Young has been around the team forever. Morris got to know Young by his close association with fellow Flint, Michigan, native Draymond Green, who ran in the same circles as Young in San Francisco and Oakland last year when they were both on the Warriors. More often than not, Young’s sentences get cut off because he breaks out in laughter or due to the “Swaggy P” catcalls coming from the other side of the dressing room.

“The chemistry, the way they share the ball, get along. It’s hard to find that in the NBA sometimes,” said Young. “Winning teams figure it out.”

Young’s time in Denver could be shortlived. The Nuggets signed him to a temporary roster spot using an injury hardship relief exception granted by the league since Denver had at least four players who were sidelined for at least two weeks. If one of those players gets healthy and becomes available to play, the Nuggets might have to part ways with Young. They could also open up an extra roster spot and sign Young outright if Denver wants to keep him around long-term. Knowing Young, he wants to be with the Nuggets for the long haul to see just how far this group can go.

“It’s great to be on a great team at the top of the West,” he said.

To commemorate last season’s championship run in Golden State, Young got some new ink, a tattoo of the Larry O’Brien trophy on his neck below his left ear. Six months later in his Nuggets debut, he finished with six-points and drilled two triples against the Thunder, a moment Young said played out exactly how he dreamed it would the night before. As he departed Denver’s locker room that night he let off another prophecy.

“I’m going to the same tattoo again after this year,” Young said. “Behind the right ear.”