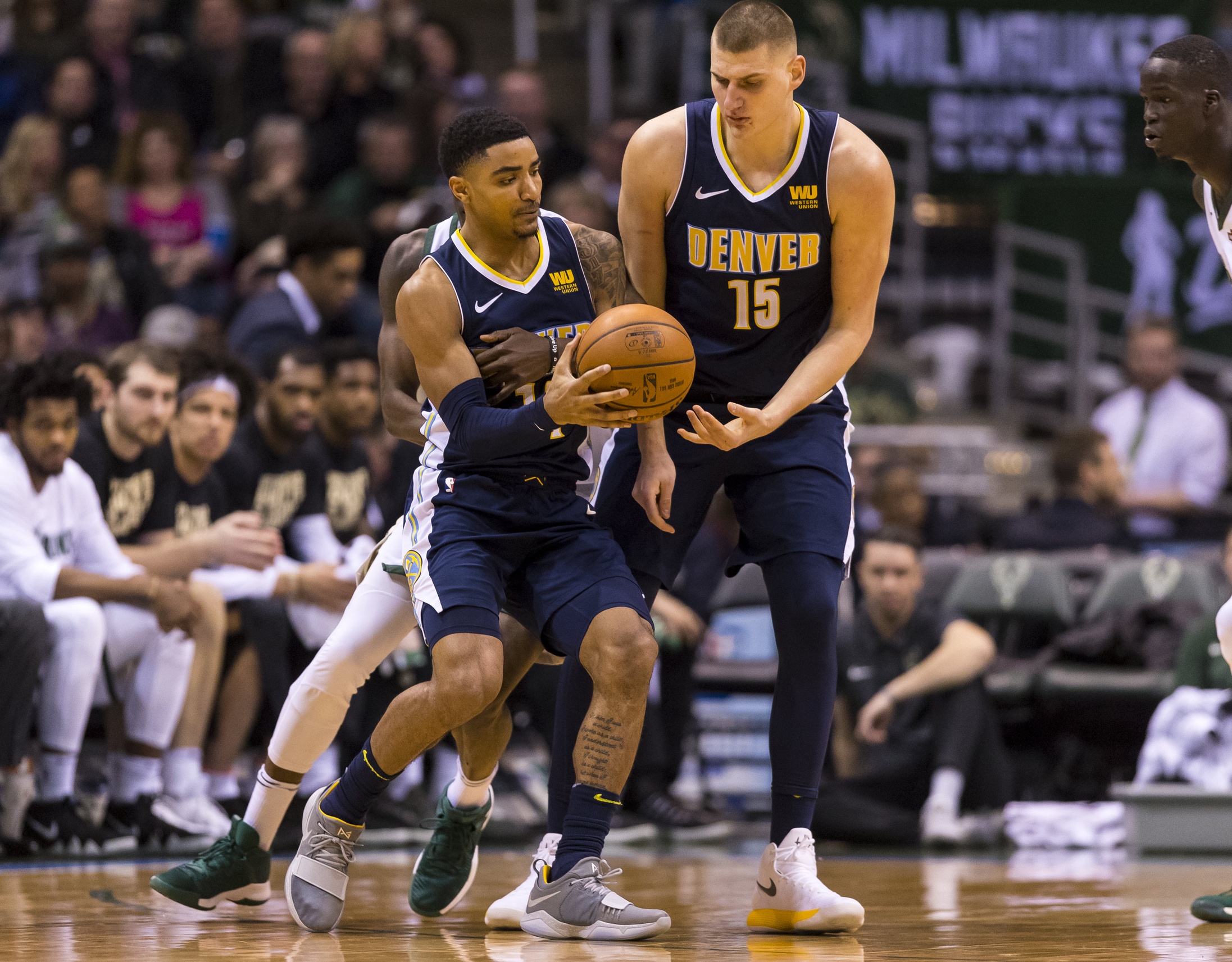 Nuggets Film Room: This is what Jokic Ball looks like

The Denver Nuggets are back to incinerating opponents on the offensive end.

In the dozen games since Nuggets coach Michael Malone announced he’d call fewer plays to try and recapture the free-flowing identity that defined his team a year ago, the Nuggets are averaging 114.6 points per 100 possessions, the third-best mark in basketball.

Thursday’s win over the Milwaukee Bucks was perhaps the best example yet of what Denver is capable when it cedes control to Nikola Jokic and follows his lead. The Nuggets shot 55.3 percent from the field and knocked down 24 threes — tying the franchise record set nearly a year ago against Golden State — in the 134-123 win.

Jokic recorded what was believed to be the fastest triple-double in NBA history in the win. He finished the game with 17 assists, the most by any center since Wilt Chamberlain was roasting fools in the late ’60s.

What makes the dribble handoff so hard to stop? The short answer is that the defense is forced to pick its poison. Does it play it conservatively and allow open threes? Does it hedge hard and allow Jokic to roll to the rim where he’s so dangerous? Does it switch and let Jokic go to work on a smaller player? There are no good answers.

Gary Harris and Jokic do a masterful job of getting good looks out of this action. In the clip below, Khris Middleton tries to go under the handoff. That gives Harris the necessary time and space to let it fly.

If a defender tries a different approach and goes over, Harris can keep heading downhill and knife into the teeth of the defense. Harris, who’s in the 90th percentile of all players in terms of finishing at the rim, per Cleaning the Glass, sees that Tyler Zeller is worried about the threat of Jokic rolling and takes advantage here.

Harris is a knockdown outside shooter and a bull in terms of getting to the cup and finishing. Those traits make him an ideal dribble handoff partner with Jokic. If defenses double him out of dribble handoffs, he’s also a capable enough passer to hit Jokic as he settles in for a mid-range jumper or rolls to the hoop.

The duo’s chemistry has been impressive from jump street. When Jokic became Denver’s starting center in December 2016, Harris was the first player to recognize how many high quality looks he could get playing off of him.

Jamal Murray was in his rookie season when Jokic became the driving force behind the league’s best offense. Murray, who’s now in year two, also seems to be embracing this style of play that features Jokic as the primary distributor.

Murray scored 26 points on 12 shots in the win over Milwaukee. His first bucket of the game, seen in the clip above, was a floater he dropped in after Bucks point guard Eric Bledsoe trailed him following a handoff with Jokic.

Murray is an immensely talented scorer, who would almost assuredly put up big numbers even if he wasn’t playing with Jokic. But the fact that the Nuggets starting center is one of the best passers in the league frees Murray up to do what he does best: put the ball in the hoop.

“I think Jamal has done a very good job of understanding that there’s not one way to play the point guard position,” Nuggets president of basketball operations Tim Connelly said. “We have a unique roster. We have a unique offense. … I don’t think Jamal is going to be John Stockton. Nor do we need him to be. So I think he’s started to understand the nuances of playing a scoring point guard and the nuances of playing off of Nikola.”

Jokic and Murray are showing signs of developing the chemistry Jokic has with Harris. In the clip below, Murray feeds Jokic with a simple pocket pass. Jokic pump fakes from 18 feet away, which sucks the defense in just enough while giving Murray time to set up for three. Murray ends up getting a great look out of this action and drills it.

Later on in the game, Murray recognized that Bledsoe was overplaying him. Instead of forcing the dribble handoff, Murray simply went backdoor, caught a bounce pass in traffic and hit a tough layup.

That might look like a fairly routine bounce pass on the first watch. But how many other centers in the league could put just enough on pass to sneak it past Bledsoe? One of Jokic’s greatest strengths as a passer is his ability to find teammates when many others players wouldn’t consider them open. 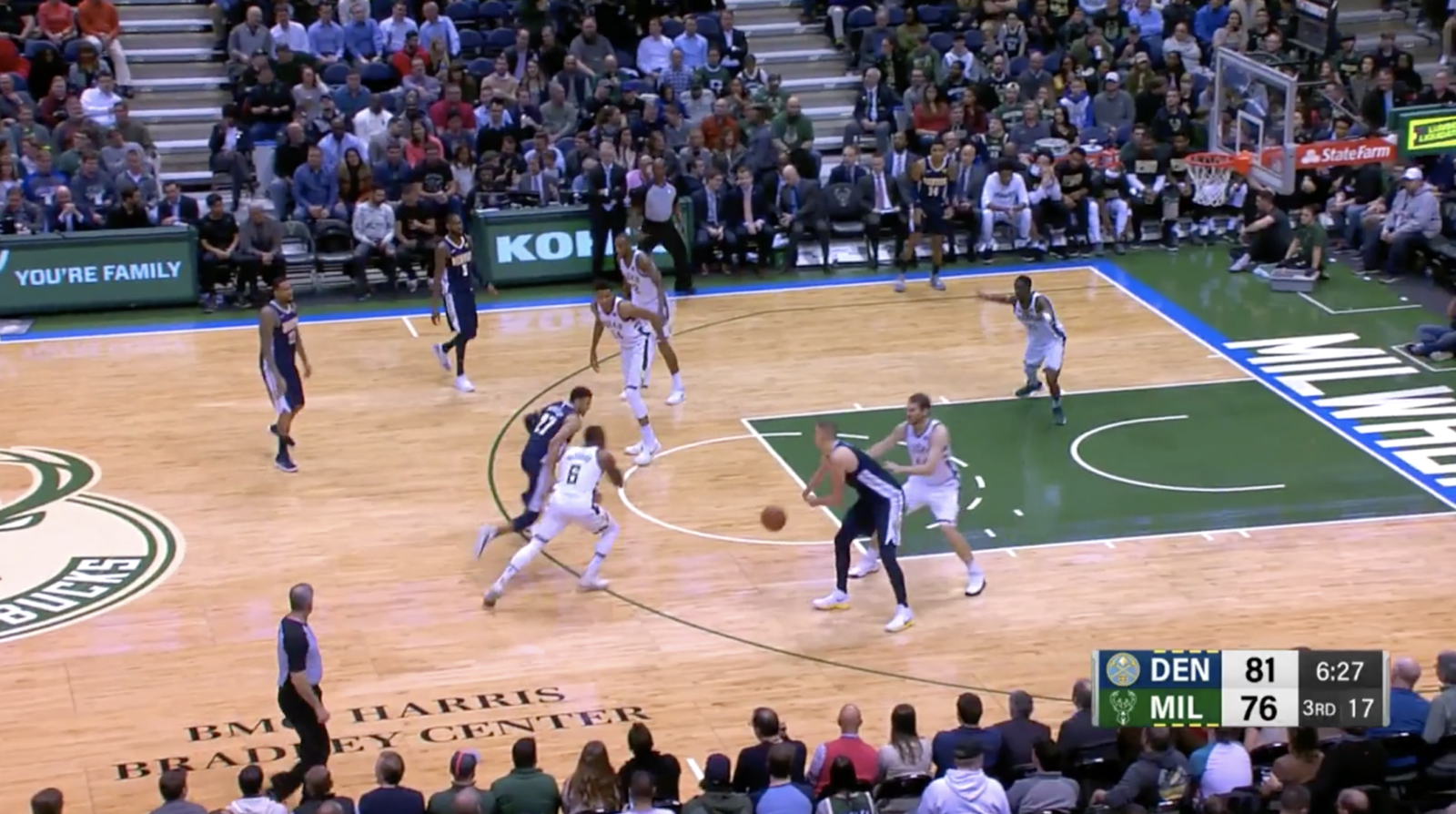 Since Malone announced he’d call fewer plays and get back to playing #JokicBall, the Nuggets are 9-3. Two of those losses have come to the Spurs and Celtics by a combined three points. Denver is leaning into the offensive identity it established a year ago and playing perhaps its best basketball of the 2017-18 season because of it.

“The ball’s flying around,” Connelly said. “One of the great strengths Mo (Malone) has is his ability to be self reflective and try to figure out what is most effective for our team. I think Nikola has such a unique mindset, such an unpredictable game. Sometimes less is more with him.

“Also, I think the guys are getting used to each other. Continuity is starting to develop with Jamal and Gary and Nikola and Wilson (Chandler). We’ve had a lot of  guys who’ve been here for several years. I think guys are starting to understand where do you want to cut, where do you want your shots. The last couple of weeks has been fun to see what we’ve done offensively.”