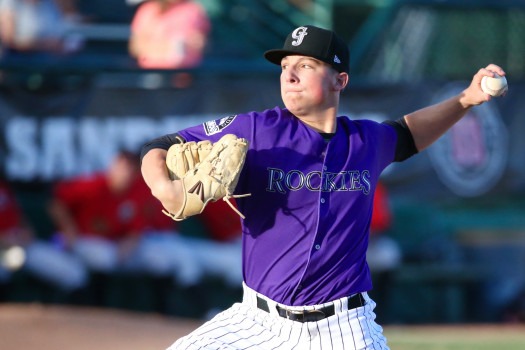 The 2019 MLB Draft takes place this week, June 3-5. For three days, teams will make selections for 40 rounds, drafting over 1200 amateur players from high school and college. This year, the Rockies hold the 23rd pick after earning consecutive National League Wild Card and finishing with the ninth best record last season.

In a continuation of our MLB Draft series, let’s examine the 2017 edition.

For the first time since 2009, the Colorado Rockies gained entry into the MLB playoffs courtesy of the second National League Wild Card. Though the final result was less than ideal against the division rival Arizona Diamondbacks, a bright future was clearly on the horizon.

The Rockies had an increased win total for the fourth consecutive season, winning twelve more games to get over .500 for the first time since 2010 and falling just short of three million in attendance at Coors Field.

Lefty Ryan Rolison was a draft0eligible sophomore out of Ole Miss. He made an immediate impact in his first season of professional baseball, dominating at short-season Grand Junction as the Rockies looked to limit the mileage on his arm after 97 innings in the ultra competitive Southeastern Conference. Signed at the slot value of $2.9MM, Rolison has continued to impress. This season, he lasted just three starts at Low-A Asheville before getting promoted to High-A on the back of 14.2 innings pitched and just one earned run. He’s dominated similarly in the hitter-friendly California League with Lancaster, pitching to a 1.99 ERA over seven starts.

Grant Lavigne joined Rolison on the Western Slope and put up equally impressive numbers for a teenager. The highest ever draft pick from New Hampshire signed above slot value at $2MM. In his first full-season this year, the 19-year-old first baseman is holding his own, but has seen his strikeout rate increase against competition two-and-a-half years older.

After 114.2 innings at Auburn, Casey Mize threw just 13.2 innings to start his professional career. In 2019, he’s been dominant in High-A and Double-A going 7-0 in eleven starts and currently holds a scoreless streak of 20 innings.

Three of the top ten selections last June have not played with their team, nor will play for the team that drafted them. Jerred Kelenic was traded to the Mariners in the Robinson Cano and Edwin Diaz deal with the Mets, Carter Stewart did not sign with Atlanta, but did sign with the Fukuoka SoftBank Hawks in Japan last month, and Kyler Murray gave back his signing bonus after winning the Heisman Trophy and was selected with the first pick of the NFL Draft, becoming the first player taken in the first round in both sports.

The Rest of the Rockies Picks

Terrin Vavra (3rd Rd, #96): The Golden Gopher opened in Boise and became a Pioneer League All-Star behind a solid season displaying a good hit tool (.302 batting average) and above average speed (9 stolen bases, 1 caught stealing). The 22-year-old shortstop continues to hit above .300 while flashing more power in his first full season at Asheville.

Willie MacIver (9th Rd, #276): After a modest debut with Boise featuring a slash line of .284/.358/.443, the 22-year-old catcher from the University of Washington has showed exceptional power at Asheville, already eclipsing his 2018 home run total and going deep in three straight games in April, including both games of a doubleheader.

Coco Montes (15th Rd, #456): The second baseman was named the MVP of the Pioneer League behind a batting average of .333, eight home runs and 42 RBI in the short-season rookie league. So far in his first full-season, the 22-year-old from South Florida has seen his numbers take a dip in Low-A.

Shelby Lackey (18th Rd, #546): As a 20-year-old last year, Lackey was excellent in a relief role. After a 1.60 ERA over 33.2 innings with Boise, the University of Pacific product was converted to a starting pitcher with Asheville. While both his strikeout and walk numbers have improved, his earned run average has suffered so far in his first 11 starts.

Luke Morgan (20th Rd, #606): The center fielder was named to the Northwest League All-Star team with Boise last year behind a .312 batting average and 16 stolen bases. After 25 games with Asheville to start the year, the 23-year-old was promoted to Lancaster on the heels of a five-game hit streak.

Hunter Stovall (21st Rd, #636): The 22-year-old second baseman out of Mississippi State was considered a candidate to convert to catcher this offseason in the vein of Tony Wolters and Dom Nuñez. Left to play infield and occasionally some outfield, Stovall was traded to the Phillies for LHP James Pazos on April 26th.

What Could Have Been?

Oftentimes, players are selected by teams in the late rounds of the MLB draft only to reject a signing offer in lieu of honing their skills at the college level before re-entering the draft to earn a larger signing bonus down the road.

In 2018, the Rockies used their final picks on Nick Pogue, Cayden Zimmerman, Kumar Rocker, and Isaiah Thomas: Pogue attends the University of Florida; Zimmerman stayed in state with Air Force; and the duo of Rocker and Thomas play at Vanderbilt.

*Gray was traded with Homer Bailey and Jeter Downs to the Dodgers for Yasiel Puig, Matt Kemp, Alex Wood and Kyle Farmer.