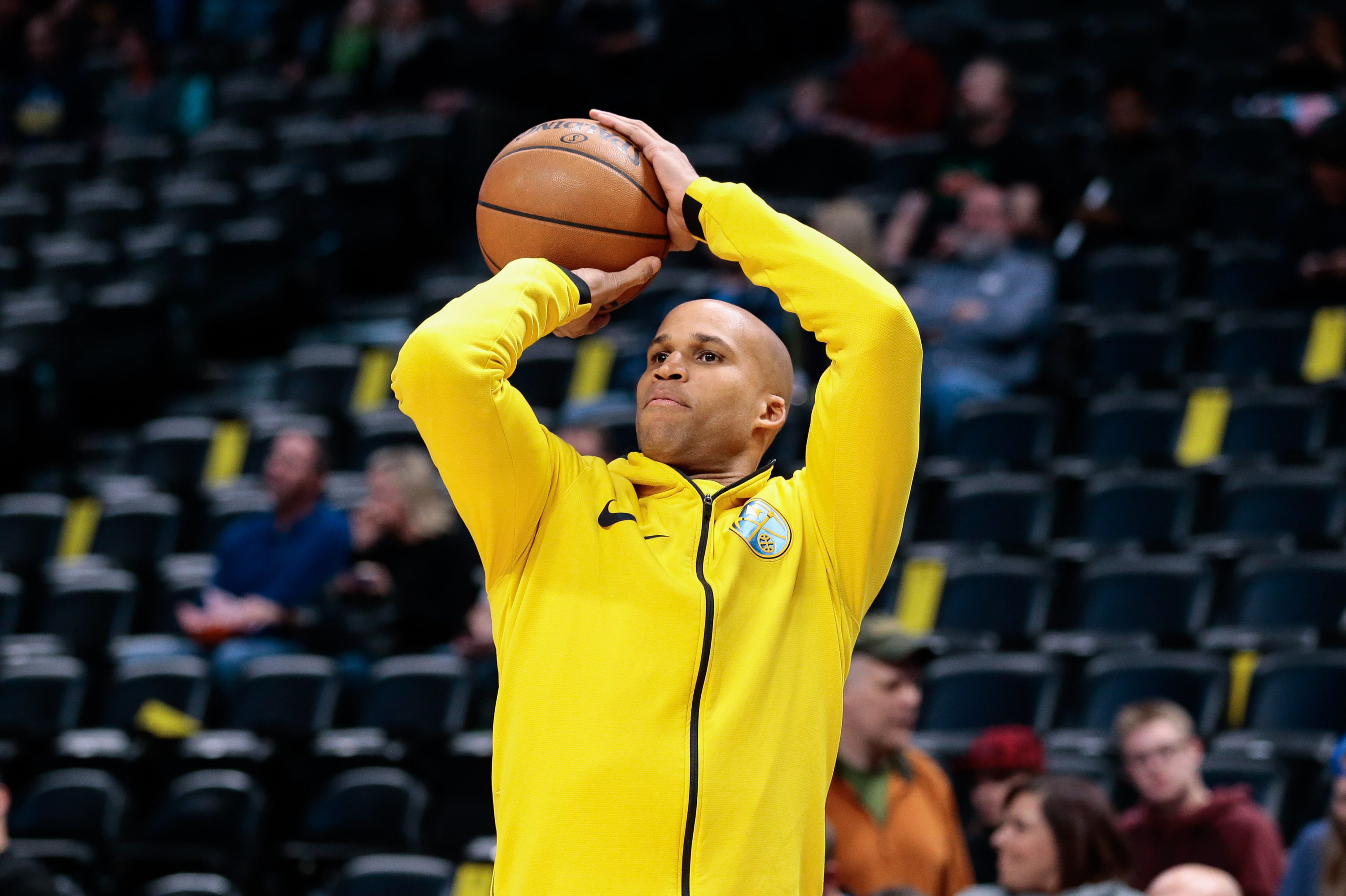 Richard Jefferson had it all planned out.

On Monday evening in Dallas, the 37-year-old was set to sit down with Mavericks forward Harrison Barnes. He plugged in his podcast equipment. He whipped out a bottle of wine. They were ready to record when Barnes and Altitude TV sideline reporter Ally Sturm arrived at his hotel room inside the Crescent Court.

“We had a problem with the instrument yesterday,” Jefferson said. “We were calling people, trying to get it figured out, trying to get it formatted. We were about two minutes away from not getting Harrison Barnes yesterday. It worked out. We figured it out.”

Jefferson placed a call to Cleveland Cavaliers sideline reporter Allie Clifton on Sturm’s suggestion. Together, they got the audio issue resolved.

“He rebooted the audio system essentially,” said Sturm, a reoccurring guest on the show. “I adore R.J. He’s so talented in many ways. But when it comes to technology…”

For the last 13 months, Jefferson has moonlighted as a podcast host. Jefferson, Channing Frye and Clifton published the first episode of the Road Trippin’ Podcast on Jan. 27, 2017. At the time, Jefferson and Frye were members of the Cleveland Cavaliers. Both have since joined new teams; Jefferson agreed to a one-year deal with the Nuggets in October, and Frye was traded to the Lakers in February.

In a little more than a year, Jefferson and Frye have combined to put out 72 episodes. Road Trippin’ was the 109th-highest rated show as of Friday in iTunes’ “sports and recreation” category — more of an accomplishment than you’d think in the saturated world of sports podcasts. A normal episode averages about 100,000 listens, according to Jefferson.

Jefferson, Frye and Clifton recorded the first episode when the Cavaliers had time to kill during a six-game road trip out West. They sat down with Kyrie Irving and discussed life on the road, college experiences and getting acclimated in the NBA. Subsequent episodes have featured LeBron James chatting about shoes, Tristan Thompson shedding light on what it’s like to date a Kardashian and Bill Walton talking about, well, everything.

“I think my favorite guest would be Bill Walton because he didn’t let anybody else talk for 45 minutes,” Jefferson said. “Or I think Tim Duncan. Tim Duncan was a great one mainly because no one had ever really heard him talk like that. Nobody had ever heard him laugh and crack jokes for 45 minutes. Him and Channing had a background. I had a background playing with him. I think when you listen to that, it’s the most unfiltered view of him you’ll ever get.”

Jefferson and Frye hatched the idea that became Road Trippin’ not long after the Cavaliers defeated the Golden State Warriors in the 2016 NBA Finals. Many of the main characters from Cleveland’s championship team — James, J.R. Smith, Kevin Love, Jefferson and Frye —  were going to dinner a lot during those days.

“We’d be at dinner for two hours at dinner arguing about random stuff,” Jefferson said. “‘Who’s playing well? Who was the best small forward or two guard?’ We’d rank them. The conversation was so good and so honest, I thought it’d be cool to record a podcast, a growing form of media.”

Jefferson wanted that authenticity to translate. To ensure it does, Jefferson serves wine, which has become the alcoholic beverage of choice in most NBA circles. He also relies on shocking guests with profanity in the early going.

“I’ll say, ‘That’s bullshit.’ Jefferson said. “‘And they’ll be like, ‘Oh, we can talk like this.’ So you just try to disarm them. That typically helps. We try and encourage them to drink a little bit too to get them to loosen up.”

Players let their guard down on Road Trippin’ — perhaps a little too much in some cases. In an episode released Feb. 9, Nuggets forward Will Barton joked that the Phoenix Suns needed to “trade the team to the G League” after the San Antonio Spurs spanked them by 48 points.

“I’m going to be the first to say it. They got to send the whole team to the G League,” Barton said. “I’m sorry. Except Devin Booker and T.J. Warren. The rest have to go to the G League.”

Journeyman Troy Daniels apparently caught wind of Barton’s remarks. In the first quarter of a Feb. 10 game between the Suns and Nuggets, he and Barton nearly came to blows.

Jefferson, who cites The Bill Simmons Podcast, Pardon My Take and Bill Burr’s Monday Morning Podcast as his favorite shows to listen to, blends comedy with questions in Road Trippin’. He’s not afraid to needle his guests.

“You’re too dark-skinned to be emotional,” he told teammate Paul Millsap on an episode released March 2.

“It’s just who he is, said Devin Harris, who’s played with Jefferson in New Jersey, Dallas and Denver. “He thrives on it. It’s hard to shut him up. I’m not gonna lie. But sometimes you need that kind of teammate.”

Jefferson, who’s in his 17th NBA season, enjoys his side job. He’s built up an impressive Rolodex because of his experience and outgoing personality. Road Trippin’ allows him to give audiences a glimpse of friends and teammates in ways that might not be conveyed in traditional media.

“Most people that want to do interviews, they only want to do a 15-minute thing or a 20-minute thing, so they want to get as much basketball in,” Jefferson said. “I think for us, it allows us to talk about whatever we want to talk about for an hour or even longer. I think it allows our stories to be a little more authentic. And when you’re talking to your teammate, your friends, you’re typically going to get a little more out of them than an interviewer.”